Grilling is one of the most enjoyable ways to cook delicious meals. But let’s be honest, sometimes you have to grill in the dark with the hopes that your spotlight provides enough visibility to get the job done. That’s why you should get the best BBQ grill light on the market, and we’re here to help you do just that.

The best grill light will be easily mountable, versatile in its light projection path, and overall simple to operate and adjust. We’ve narrowed down the top ten models on the market by analyzing these features among others. So, let’s jump into the list! 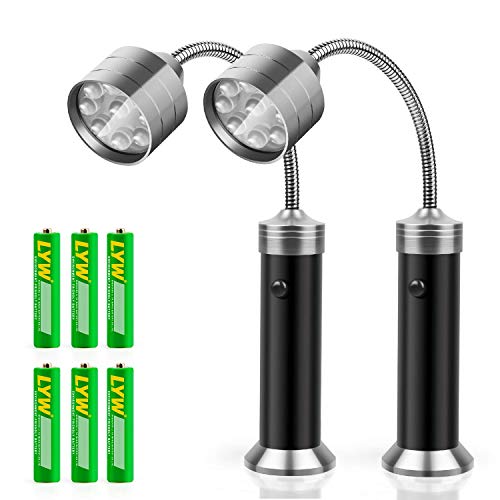 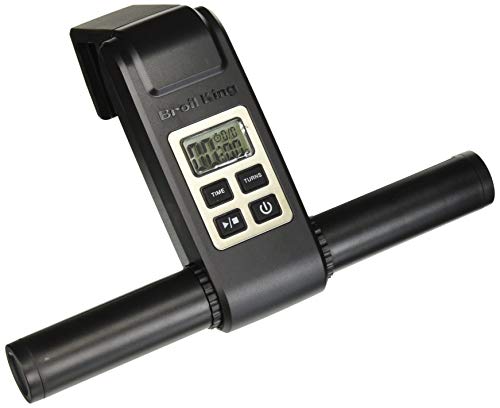 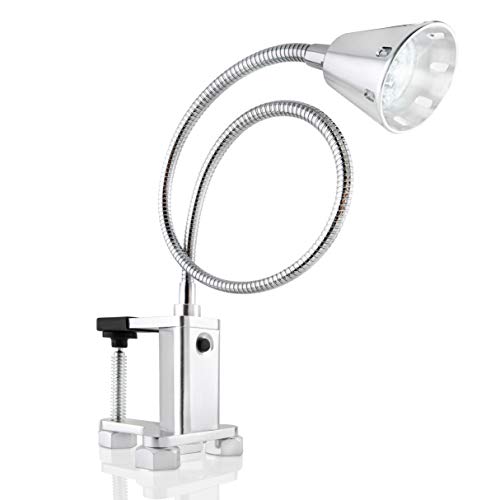 The best magnetic grill light on the market is the KOSIN Barbecue Grill Light. This model comes in a two pack so you can really light up your grill or keep one as a spare.

Consumers are highly pleased with the KOSIN lights, claiming that the low price shouldn’t scare you off. Many consumers also enjoy the case that comes with it.

The next battery operated BBQ light in review is the Broil King Deluxe Grill Light and Timer. This unit is constructed of two cob style lights that are held to a unit with a built in timer. It has a clamp on the back of the unit in order to attach it to rounded lid handles of many different grill models, despite being designed for Broil King models.

Consumers are mostly satisfied with this Broil King model, but many have their concerns. Some consumers claim the unit didn’t hold up to the heat and melted the battery box.

The third model in review, the Livin’ Well Magnetic Grill Light, is a LED gooseneck battery operated BBQ clip on light. This model is designed similarly to the KOSIN model but it also has a clamp around the base, making the unit both magnetically mounted and clamp mounted. The gooseneck on this model is also twice the length of that of the KOSIN model.

Consumers are overwhelmingly satisfied with this Livin’ Well gooseneck model, giving props to its versatility beyond the grill.

The LED Concepts BBQ Grill Lights are another set of LED magnetic grill lights. These lights are nearly identical to the KOSIN model and the LED lights produce roughly 200 lumens. Also coming in a two pack, the lights are waterproof with a class rating of IP44.

As is seemingly standard with these gooseneck models, consumers are blown away by their quality and adjustability. One consumer has noted that it didn’t hold up in heavy rains (to be fair, it’s not necessarily supposed to). 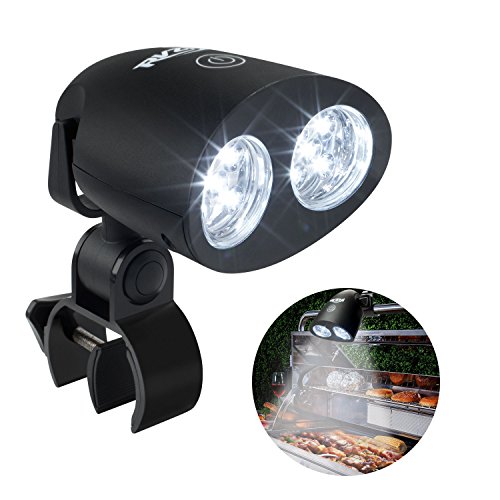 Continuing on with the grill light reviews we get the RVZHI Barbecue Grill Light. This light utilizes the clamp style attachment and projects light from two bulbs on the head of the unit. Its power button is touch sensitive so it’s super simple to turn on and off

Consumers are mostly pleased with this models brightness and ability to light up the grill. However, a few consumers note issues with even little bits of moisture. 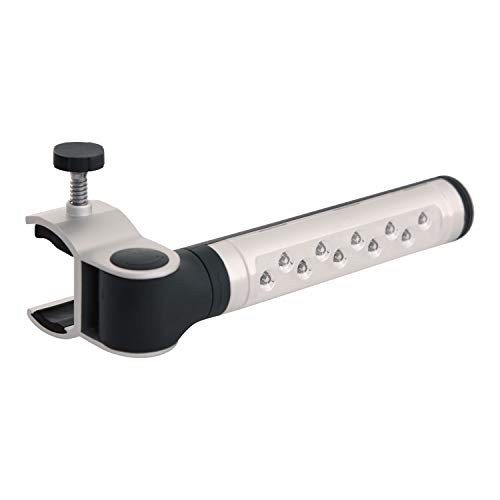 This cob style light is a hit among consumers thanks to its fully adjustable light projection angles. Some do warn about using the unit in wet conditions, however. 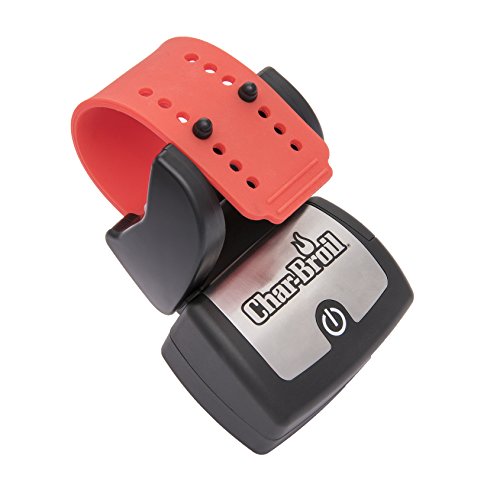 This next BBQ grill light in review is the Char-Broil 7818607R04 LED Light. This unit utilizes the least effective mounting mechanism of any of the models on the list, using a silicone band much like that of a child’s wristwatch (but of course much stronger). This unit too utilizes a touch sensitive power button for ease of use.

We hate to judge a book by its cover, but this unit isn’t exactly a homerun with consumers. It apparently breaks and becomes faulty relatively fast and its light angle is relatively restricted. 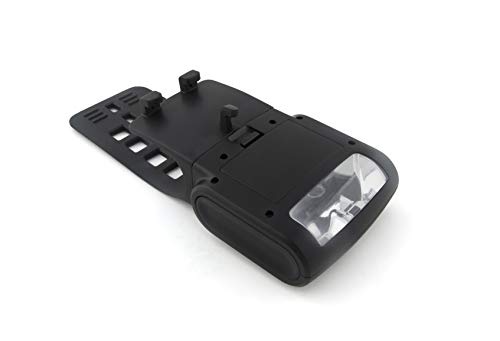 Up next is another Broil King light model, and the top rated grill light at that. This unit utilizes an elastomer strap similar to the Char-Broil model just reviewed, except that it’s exceptionally stronger and more sturdy. Its light projection is also only adjustable by rotating the unit on the handle of the grill.

Consumers are more than happy with the light output from this Broil King light. They claim it’s extremely bright and that it holds up to heat and the elements very well. 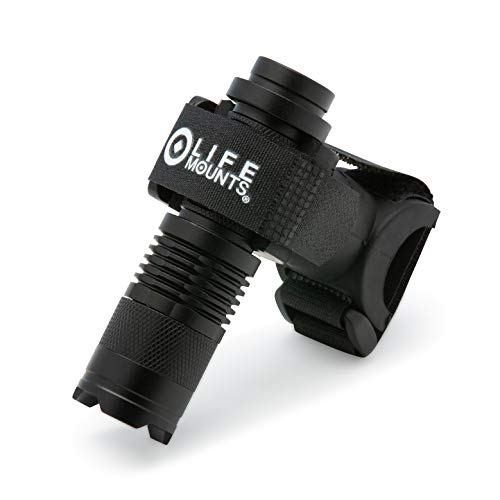 Our next model in review is the Life Mounts All Weather LED Barbecue Grill Light. This unit’s light source is more of a flashlight style light but it really sets itself apart with its universal mounting mechanism, capable of attaching to any grill.

Consumers call this model “well thought out and well made.” The light is noted to cover the entire grill and require little adjustment to get through your grilling sessions. 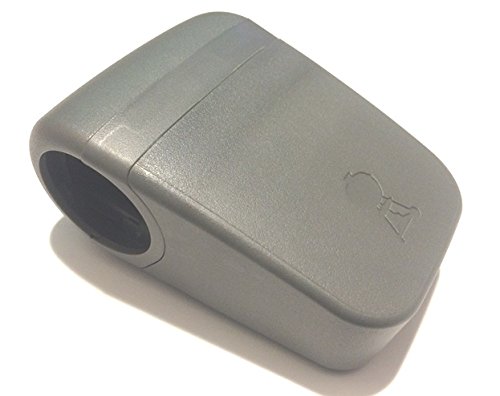 The final model in review is the Weber 65612 LED Grill Handle Light. This unit is the least versatile light on the list and is really only guaranteed to work on specific Weber models. It is, however, constructed well from durable resin that is both heat and moisture resistant.

Consumers are split on this model, with many noting that it didn’t fit their grill and others claiming it to be relatively ineffective when it does.

When it comes to picking a quality gas grill, you want to ensure that you are vetting the ones that interest you properly. When you do this, it becomes a lot easier to make the final decision.

The first factor to consider when shopping for the best outdoor BBQ lights is the installation or mounting mode. For instance, you have the models that are magnetically mounted, providing you light with little to no effort at all in terms of installation.

Then you have the clamp models, which are very strong and typically effective. However, these models are typically not as adjustable as the magnetic mounting units.

And thirdly, we have the strap-style mounting units, such as the Broil King and Char-Broil models discussed towards the end of the review list.

These units are the least adjustable when mounted regarding the light output and don’t even come close to providing the secured attachment that the other mounting styles do.

The next factor to consider is the angle of the light and the ability to adjust that. The models with flexible goosenecks are the most adjustable and are able to target very specific spots in the grill.

However, the models with full adjustable pivot-style mechanism also offer incredible light projection flexibility, despite their being locked into one position.

And then there are models such as the Weber model at the tenth spot that don’t allow for any light angle adjustment, meaning you have to hope that the light is bright enough and projects enough to cover the entirety of your grill’s surface.

Versatility outside of grilling:

The magnetic and clamp style models are suited well to be used in a variety of different scenarios, whether it be a work bench, under a car for mechanics, or some other tough task required targeted light.

Of course, the models that are specifically designed to attach around round handles may not be nearly as versatile as other models.

The following is a list of FAQs regarding barbecue grill lights:

What does it mean for a light to have 360º adjustability?

This simply means that you are able to adjust the light’s projection angle in all directions, vertically and horizontally. Therefore, these light models give you the best chance at lighting every corner and seeing the entirety of what you’re doing in clear light.

Models without 360º adjustability are definitely restricted in comparison and do not guarantee that you’ll be able to light every dark spot of your grill to your desire.

Can any grill light model fit to most, or all, grills?

Most of the models reviewed are very versatile in terms of the grills they are compatible with.

However, models like the Weber unit reviewed at the tenth spot, they’re really best suited for the particular brand they’re designed for and have a high probability of giving you trouble on other models.

What does the specification of lumens tell us about the light?

Lumens denote the amount of visible light (to the human eye) given off by a lighting unit. The higher the lumen count, the brighter the light will appear to be, and thus it will light up more than lesser lumen models.

It’s in your best interest to seek out the highest lumen model. However, many models don’t explicitly list their lumen output.

In conclusion, the best barbecue grill light is the KOSIN Barbecue Grill Light based on its ease of use, the fact that it comes as a two-pack, and its highly adjustable light angling.

The unit is also exceptionally priced for its quality and the fact you’re getting two of them. If the magnetic base, gooseneck style isn’t for you, perhaps you should consider the Broil King Deluxe Grill Light and Timer.

While the lights on this unit aren’t as adjustable as a gooseneck model, it comes with a built-in timer to make cooking your food to perfection a breeze. There are also two cob style lights in the unit, providing a large light projection path to the grill.

No matter the model you decide to choose, be careful to read the full description and ensure that it will fit your grill. With so many quality models to choose from, you’d be hard pressed to choose a wrong option. So, get your grill light today before the season swings into gear!

Early on, I learned that smoking meat was a science and an art.

I was in awe of pit masters who could maintain a constant temperature in their smoker. It required patience and a little bit of babying the smoker. My hope is to share some of what I have learned via my smoker grill reviews.