This isn’t just a pellet smoker comparison. It’s a battle royale between the two most popular wood pellet grill brands: Rec Tec vs Pit Boss. Each one is vying for the top spot in three categories. We sorted through all of the brands’ grills, paired them off and rang the bell. They came out swinging. First, there’s the plain champion. Then there’s the top mid-sized model. Lastly, we have the best portable/budget grill.

Here we go. This is going to be one heck of a fight. 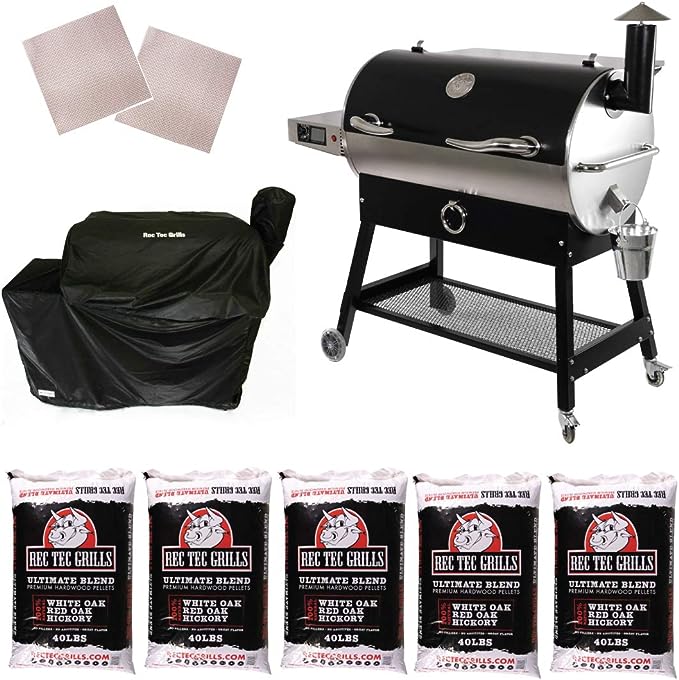 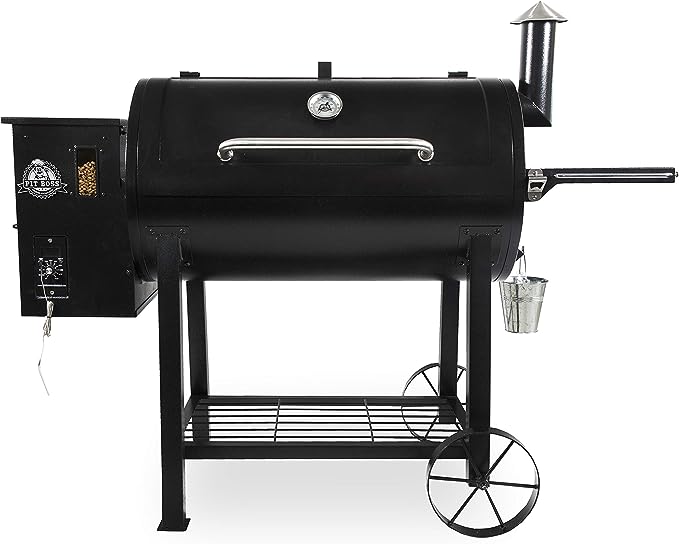 This matchup is the fight for the best pellet grill on the market. Both of these grills are big and of great value to the serious barbeque lover.

They match each other in versatility, being able to smoke on the lower end of their respective temperature ranges and sear at the upper limit. You can slow cook, bake and roast at points in between.

Both grills are made of stainless steel, with stainless hardware. The Rec Tec has stainless cooking grates, which will never rust. Our Pit Boss features porcelain-coated cast iron grates. Porcelain is more resistant to sticking than any steel. So the PB-1000 wins out there.

The biggest difference is price. The RT-700, known affectionately as the “bull grill,” costs almost $1200, while the PB-1000 has an incredible value with its price tag of just around $600. So what justifies the RT-700’s double cost? Let’s see: 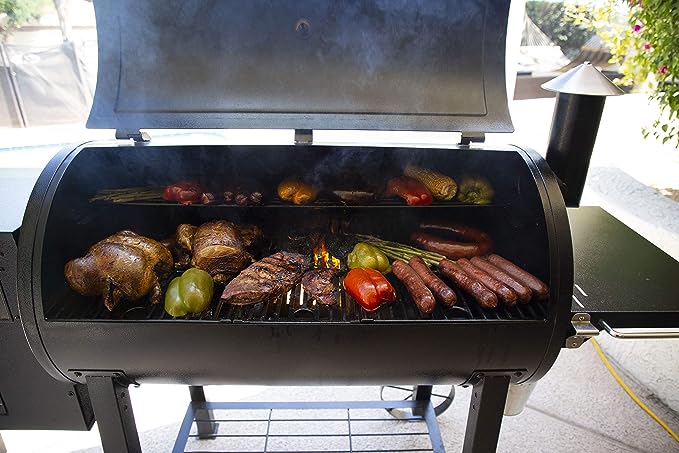 Those who went with the RT-700 talk mostly about how awesome it is to check the temp and raise or lower it from inside the house or the other side of the yard. This is an impressive feature that can be found on many of Rec Tec’s higher-end USA-made grills. But that’s not the only thing they talk about.

That big hopper is a hit. People say that they can smoke all day long and never even have to open the lid. The main complaint is the price. Of course, no one mentions that until there is a problem. Then you’ll hear something like “I paid over a grand for this grill, and now my chops are sticking to the stainless steel grate!”

And sticking is another gripe, but it’s usually solved by seasoning the grate by coating it with oil and heating it for several hours.

The Pit Boss has some big fans as well. People just love the value they get. According to Pit Boss BBQ reviews, this really is the best smoker for the money. That’s the definition of value, isn’t it?

With its superior build quality, user-friendly controls, impressive cooking space and large hopper size, the RT-700 is the best pellet smoker on the market. It’s made for the chef who wants it all and will spare no expense to get it.

The PB-1000 is just as durable, but lacks the fancy Wi-Fi and may need its hopper refilled during extended smoking. But with an almost unbelievably low price tag, it offers the best value on the market right now. 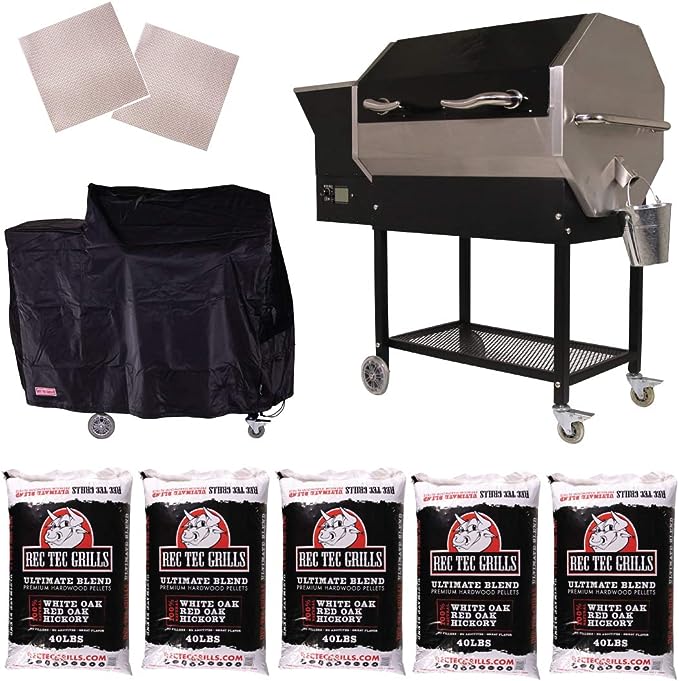 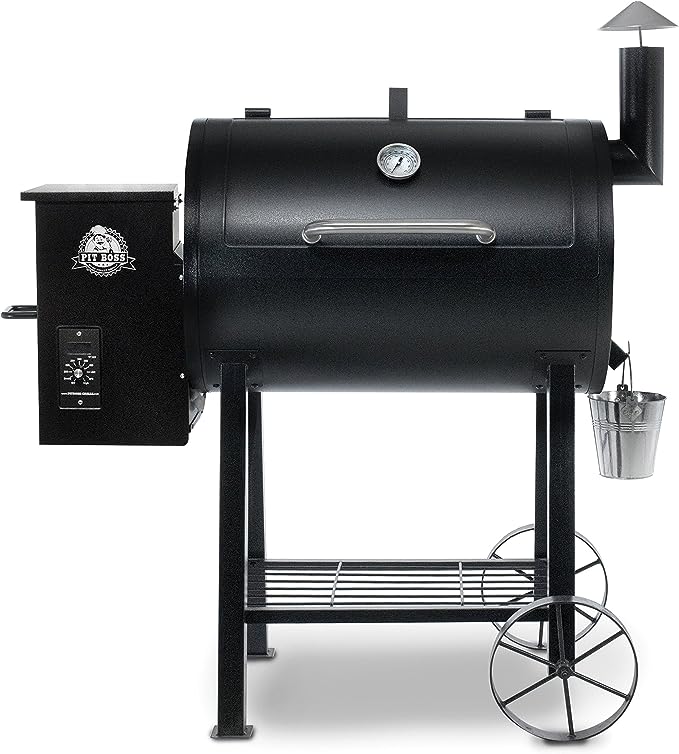 So, which is the best middle size pellet grill? Again, the Pit Boss has a lower price. And again, the Rec Tec is more expensive, but it wins out on most of the key features. It’s going to be another battle of the most impressive features versus the best value.

Thankfully, both of these also have the same stainless steel construction as their larger and more expensive siblings. Both are durable and have decent warranties. The main differences between the two are price, convenience, cooking area and hopper size. 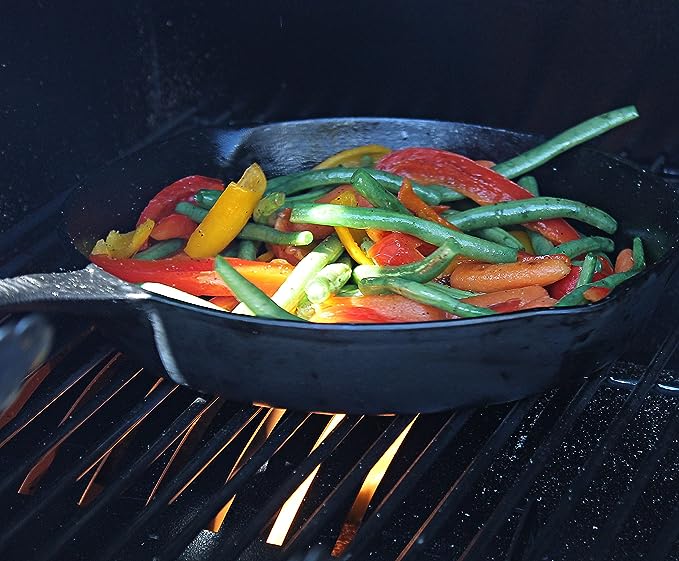 People were glad to see a more reasonably priced Rec Tec grill that still has the same great features as the more expensive models. And they still love the Wi-Fi. The biggest complaint about this one is the cooking area. They wish that the extra rack was an option here.

Perhaps Rec Tec will take notice and make one of those extra grates to fit the RT-590. Those who smoke meat a lot are very happy with the hopper’s size. Many have cautioned that the firebox shouldn’t be filled all the way up, though.

It can be a waste. When you look at the hopper and compare it to the cooking area, you can end up with a bunch of pellets burning away uselessly after the food is done.

Some think that the Pit Boss is overpriced. That’s weird when you consider the $300 disparity between it and the Rec Tec. Everyone who bought this Pit Boss is generally pleased and feel that they got a good deal.

Rec Tec’s mid-sized pellet smoker is a premium grill for those who are willing to spend a little extra for the convenience of Wi-Fi control and don’t mind the smaller cooking area.

Pit Boss has made a good pellet smoker that has more cooking area, but you’ll have to keep a close eye on the hopper. It may be a good choice for you if you need to go cheaper. 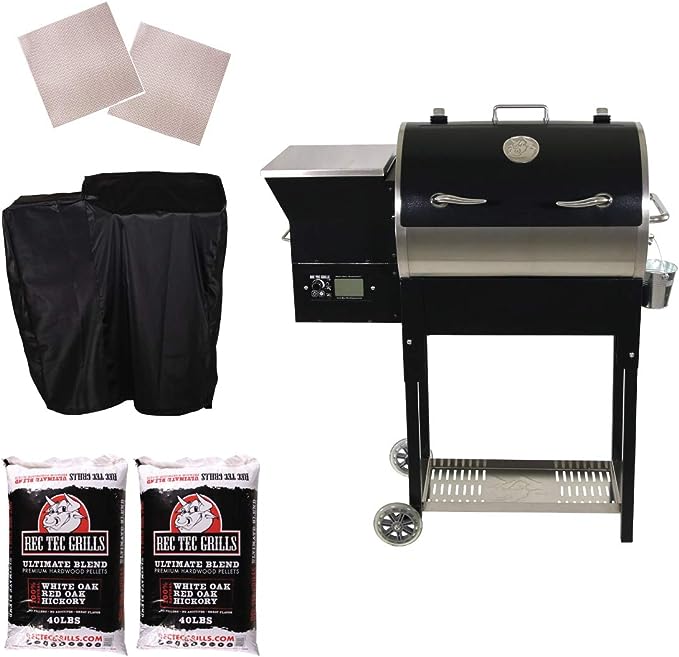 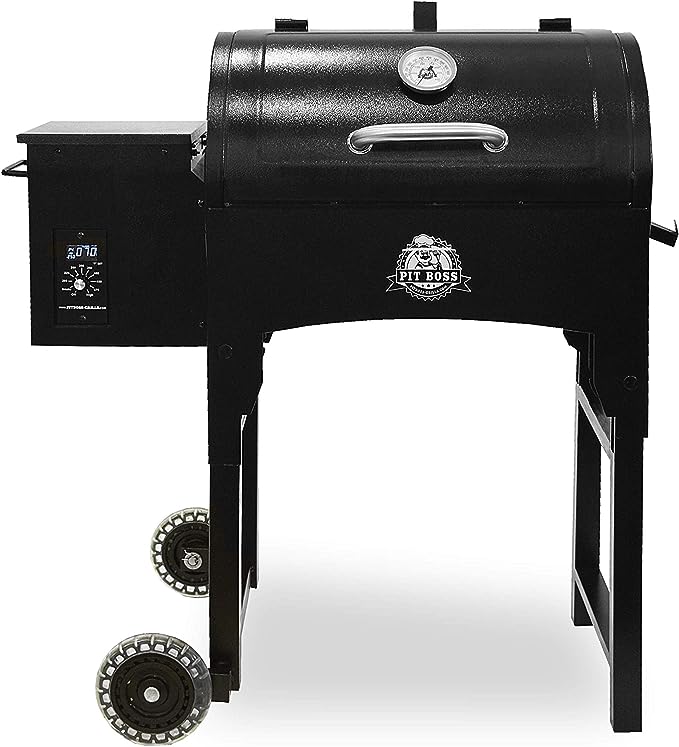 The epic battle between Rec Tec and Pit Boss continues in the contest for the best small smoker grill. But this is more than that. It’s also a competition for the best portable grill and the greatest of the budget grills.

So if you need to watch how much you spend, need a smaller smoker or if you like to tailgate or picnic away from your home, pay close attention here. 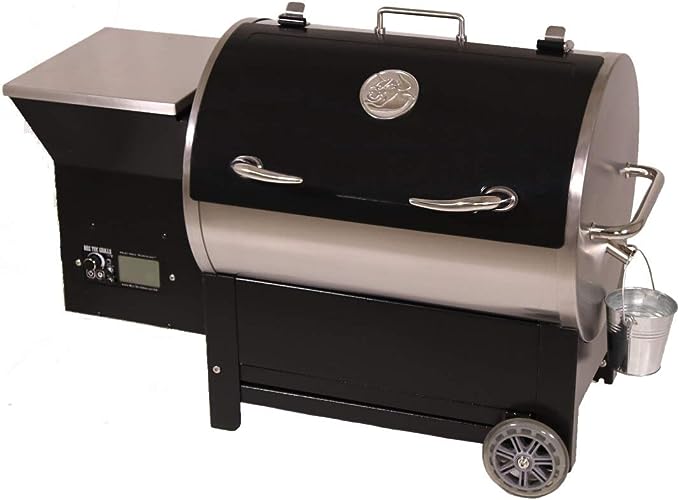 Many people who have moved to the Pit Boss from another portable grill have commented on how much more space they have. And they brag about being able to broil at tailgating events. That draws a lot of attention and gives the impression that the grillers really knows what they’re doing.

There have been some complaints about the hopper size. It is small, so it usually has to be refilled during extended periods of cooking. But the small hopper has also gotten some compliments. There isn’t a lot of hot glowing pellets to worry about when the cooking is over, and there’s less chance of a fire hazard.

The Rec Tec gets some great reviews. It is very high-tech for a portable grill. The Wi-Fi is an impressive feature, especially out at events where almost everyone else has a tabletop charcoal grill or a small propane unit.

But to use the Wi-Fi feature away from home, you’ll have to use a device with a mobile hotspot. It’ll work just fine then. Overall, owners of both grills are apt to be happy with their choice years after the purchase.

As usual, the Rec Tec takes the cake for its precision design and futuristic features. All of this comes with a price, but it may be worth it for you if those extra features will actually be useful for you at home or on the road.

The Pit Boss is definitely more affordable, but again lacks the convenience of remote monitoring. It does, however, offer more room for cooking and a broiler for that bit of added versatility that is hard to find on even full-size grills.

And The Winner Is…

You’re the winner, because now you know all about the six most awesome pellet grills on the market today. As far as the winning grill, that all depends on what you want out of your combo.

The overall champ is the Rec Tec Bull. It has the most amazing features and is the most durable pellet grill. But if the price is too steep, you can go with the Pit Boss PB-1000 and save about $600 without sacrificing much by the way of features.

The mid-size matchup was close, but the Rec Tec Stampede came out ahead in the useful features category. But the PB820FB from Pit Boss came in with a lower price and more cooking area. So that’s a bit of a tossup. The Rec Tec is the fancy one, but Pit Boss offers a better value here.

The best budget smoker is the Pit Boss PB440TG. It’s sturdier than the Rec Tec Trailblazer, and it folds easier. Plus it’s cheaper.

Pit Boss gets an additional honorable mention for adding a broiler to all three of these cool combos.

You vote with your dollars. So which one will you crown a champion?

Also, find out differences between REC TEQ grills and Traeger.